La Crosse, WI: A Town Found in The Driftless Region

In my last post, I said I’d bake a mixed berry pie. Well, I did! (My friend Julia is to the left)

Hello friends, it’s Molly and this is my first post since my 7 month trip. If you read my last post, I mentioned I would still use this blog for my adventures in the USA. So, lets start!

All is well in the Midwest, well I guess except for the government shutdown, but that’s everywhere in the USA today. If you didn’t know, the Affordable Care Act (Obamacare) is a renovated heath care program. It has gone through the senate and was deemed constitutional by the Supreme Court. The republican dominated house does not want it to be funded, but the democrats do. Last night (Monday), Congress had to make a decision about funding government programs. The republicans said, “let’s fund the government, except for Obamacare. We can delay that decision.” Of course, the democrats said they wanted to fund Obamacare. Due to the stubbornness of both sides, there was no decision on government funding. So now, we are at a standstill and the majority of government workers are not at work today because there is no money to pay them. Which is why this situation is called The Government Shutdown.

I wanted to summarize this issue for my friends abroad, I hope this is helpful!

Lately, I have been enjoying my time back in Minnesota. It has been over a month since my trip and I’ve kept myself busy. I’ve been job searching, reading, playing ukulele, nerding out on computer games, playing ultimate frisbee, and most importantly bicycling. My Dad’s 1979 Panasonic may be a little heavy for a touring bicycle, but I love riding it around Minneapolis. The Green Way (the bicycle highway) is only a 10 minute ride from my house and I use it almost everyday. It’s so handy.

As you can see, I have lots of free time. So, a couple weeks ago, I went to La Crosse, WI to see the premiere of a documentary called Mysteries of the Driftless. The organization that produced this film is called Untamed Science and they summarize themselves as, “a 501(c)(3) non-profit organization dedicated to inspiring the next generation of scientists and science minded citizens through adventure based media.” I know one of the filmmakers, his name is Rob Nelson. He let me sleep on his couch when I was in Charlotte, NC. What a nice guy. I was hoping to see him and his family, but he couldn’t make it to the premiere.

Well, I bet you are wondering what “driftless” means because it’s in the title of my post and it’s in the title of the documentary. Before I tell you, here’s a bit of history. About twenty-two thousand years ago, the most recent glacial period was at its peak. This is commonly known as the Ice Age. During this time, glaciation, the movement of glaciers, was ravaging the land. These huge blocks of ice migrated across the USA and flattened everything in its path. In Minnesota, most of our landscapes are rolling hills or it’s completely flat. This is solely due to glaciation.

Well, glaciation occurred for over a hundred thousand years and formed what we in the Midwest know as the Great Plains. Oddly enough, due to the placement of the Great Lakes and other geological factors, the small area that includes SW Wisconsin, SE Minnesota, NW Illinois, and NE Iowa was never touched by glaciers. Imagine, there were a hundred thousand years worth of opportunities for this area to be run over by a glacier, but it never did. This is why this region is called The Driftless and that is why this place is special. The Driftless area is completely different from any other place in the USA (possibly the world). What it is famous for is its bluffs (a steep cliff), deep underground caves, and endemic species. It is also well known for its primitive cave art. If you are interested in learning more about The Driftless Region, you should check out the documentary. Here’s the link. Mysteries of the Driftless. I also follow Untamed Science on Facebook. If you want to learn more about them, you can check out their website too.

The Mississippi and the bridge that connects Wisconsin and Minnesota

I really enjoyed my time in La Crosse. It has a small town feel and the downtown is adorable. It is full of antique shops, local restaurants and bars, and bike lanes. I was pleasantly surprised to see how bike friendly the town is. I brought my bike with me and spent the whole first day riding on the trails. There are 8 miles worth of trails going through the marshes of the Mississippi and then I jumped onto the country roads and biked till the premiere that evening. While biking, I noted that La Crosse is nestled in the Mississippi Valley and surrounding it are the famous bluffs. On my way back, I was fortunate enough to bike along the steep cliffs.

After the premiere, my couchsurfer host, Ryan, brought me to his house and I was surprised to see he lives right beside the highest bluff in the area, Granddad Bluff. Ryan was born and raised in the Driftless Region, so he told me he doesn’t think twice about living next to such an iconic marker. Also, before seeing the documentary, Ryan had never heard of the term “driftless,” so he was very surprised at how special his hometown is. It was pretty cool talking to him about the documentary, but also about his life in general. He is a very interesting guy. He is a ex-Peace Corps volunteer and he just got back from 3 years in Madagascar. Thanks Ryan, for letting me crash on your futon!

La Crosse, WI. You can see the Mississippi River and the cliffs in the distance.

Another view, but facing NW. Those are the marshes I biked through.

The next day, I hiked up to Granddad Bluff. I got a few pictures of the town, as you can see. The hike itself was pretty easy. You can either climb up by the highway or there are random trail heads at the bottom of the cliff. It was quiet hike, since it was a Tuesday afternoon, I really enjoyed that. I walked most of the trails that Granddad had to offer by mid-afternoon, so I looked on the map and saw that Hixon Forest Nature Reserve was nearby and decided to check it out. 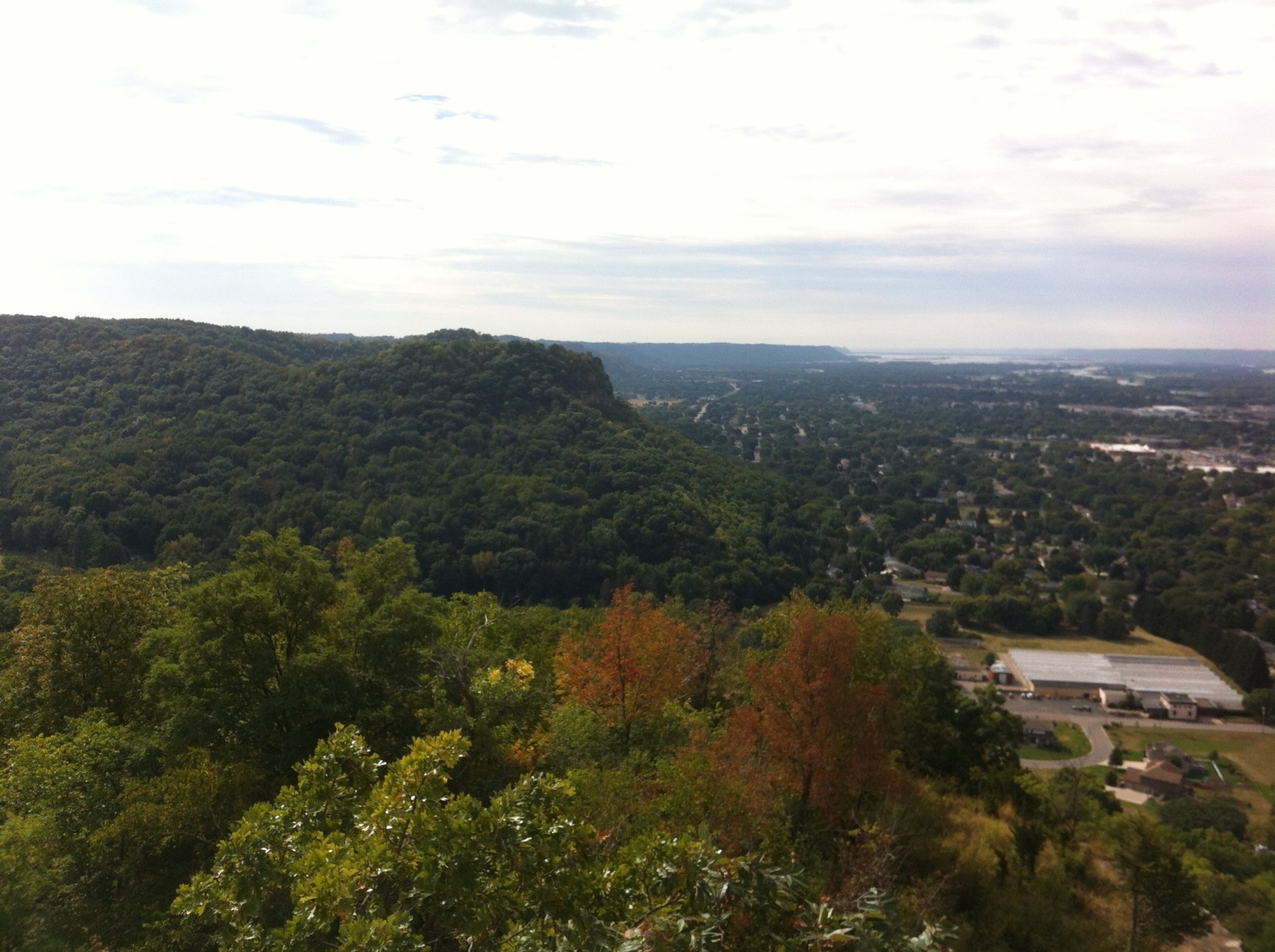 Here’s one last look from Granddad bluff, but to the SW.

I drove to Hixon Forest Nature Reserve and had to make a decision. Either take a right and walk into an open prairie or take a left and go into the forest. I decided the prairie because I thought I’d get better views of the landscape. I learned quickly that I found a mountain biking hub and I ended up walking on some intense biking trails. I passed some bikers and I was really impressed by their stamina and courage! There were steep drops, steep inclines, and lots of natural obstacles. You’d never find me on a bike on that trail, I was completely content walking, thank you very much! I found myself in a forest eventually and had fun trying to identify the trees. I only had a tree identification book of the Pacific Northwest, but it was still useful in some regards. There were lots of oaks, sugar maples, and white pine. I wish I knew more about the area because there were some very pretty trees that I couldn’t identify.

I walked in a white pine forest for a short while. It was part of the biking trail.

The next day, I woke up nice and early and decided to go on one last bike ride. I biked through the town, stopped by the University of Wisconsin-La Crosse, and went on the marsh trails again. I rested at a bench that had a view of the bluffs. I thought to myself, “wow, I am in a place that has looked like this for hundreds of thousands of years.” It really is a blast from the past. To think that prehistoric creatures, Indians, and colonial settlers have walked where I walked and have seen what I seen. How cool is that? Maybe it’s just me being a dweeb, but what really matters is that I enjoyed my time in La Crosse.

Hope you liked my post and that you learned something new.

← Minneapolis: Molly’s Home and The End of Her Journey
My Local Adventures in Minneapolis and in Crow-Hassan State Park →

One Comment on “La Crosse, WI: A Town Found in The Driftless Region”