Today is my last day in Portland, OR. It’s bittersweet to leave such a beautiful city. Where else can you find towering Douglas-firs adjacent to exceptional food carts? I also don’t know of any other place that offers so many urban trails all within the city limits. I’ve been exploring them these last couple days and they’re awesome.

Starting last week, I was graced with the presence of a gentlemen named Mike. He’s my friend Ben’s roommate and he was kind enough to hang out with me on his days off from work. On those days, we went rock climbing at Portland’s Rock Gym, we ate lunch at Fire on the Mountain, and we made delicious homemade pizza together. But you know what has been my favorite part? It’s been the early morning coffee runs and long conversations we’ve shared. He’s good people and I’m very grateful to have had the chance to get to know him better. Good luck on your marathon, Mike! I have a good feeling that you’ll qualify for Boston. :)

So, after a week of coffee runs and conversations, I found my way to Lincoln City’s Oregon Coast. My friend was having a birthday extravaganza and on the drive there, I watched as the flat Oregon countryside turned into hilly wine country to then the coastal mountain range. Oh, and I can’t forget that Queen was our inspirational road trip music.

We played frisbee on the beach!

We got there early and decided to take advantage of the beautiful day (a rarity on the Oregon Coast). We went to the beach and enjoyed ourselves. One friend did some taichi, another got their feet wet in the ocean, and I spent a few special moments walking along the beach by myself. It had been a long time since I’d been on the Oregon Coast. It felt good to have the Pacific’s frigid waters grace my feet once more.

We returned to the house to find more people inside. Many of them I had met in college and it was so great to see them again, especially my friend Neil. I hadn’t seen him in over 3 years. That first night was full of eating delicious food, sharing stories, relaxing in the hot tub, and then watching the sun set over the Pacific Ocean. In all honesty, watching the sun set over the horizon never gets old for me. <3

Finding a staircase to take us back to our beach house 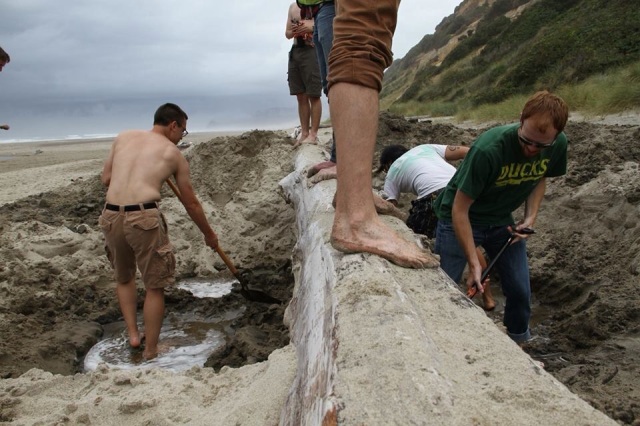 Before I go on much further about this beach party, I just want to give you a better idea of what Neil’s beach parties entail. There are traditions that Neil and his buddies have followed since high school. One of which is digging a giant pit into the sand and then finding a log to lay across it, thus creating (in Neil’s eyes) a Death Pit. For years, friends have fought, skin has been torn, and pride has been bruised, all for the chance to be the champion of the Death Pit battles. So, early on Saturday morning, a small crew and I started the long task on digging this Death Pit. It took most of the day, but when we finished, it looked pretty epic. We even hit the beach’s water table, which resulted in the bottom pooling with water. At first we were saddened, but soon realized the water only made the pit even more deadly!

The rest of the day, I relaxed and rested my sore shoulders and back. I took a nap on the beach and then decided to do what I’d never done before; jump into the Pacific Ocean. It was freezing! I don’t know if it was completely worth it…but I’m glad I did it.

There were moments when I sat on the beach, watching the tide come in, and thought how lucky I was to be there at that very moment. How I was lucky to have such great friends, to be blessed with perfect weather, and to have been given the chance to work and travel simultaneously. For that, I am grateful.

Honestly, the rest of the day was a blur. I believe some board games were played, dinner was prepared, and the sun had set. Once the moon had come up, I decided to do something that I’ve been wanting to do since May, which was scream as loud as I could at the ocean. When night fell, a group of us walked to the beach and then I separated from them. I walked to the shore, let the cold saltwater numb my toes, and I stood contemplating for awhile. Thinking of what? Well, I was thinking of my old roommate Paul. He’s the one who inspired me to scream at the ocean. While thinking and remembering him, some of my friends came up and said hello and asked what I was doing. I told them I was going to scream as loud as I could at the ocean. I thought they would be weirded out by this declaration, but they were not and highly encouraged it. In the end, we all screamed together and I belted as loud as I could.

Well, after that, all that was left to do was the fight over the Death Pit and man was it intense.

It was dark, there was a storm brewing in the distance, and somehow, almost all the participants returned back to their ancestral state. For some of the participants, it was mostly fun and fear that fueled them to fight, but there were a select few who were fueled by adrenaline. As I sat by the fire, watching as men tangled and wrestled on the log, I felt like I was reliving Lord of the Flies. There was even a battle drum, which was continually played throughout the whole thing. There were some heroic leaps, a dazzling kung-fu style evasion, and a little bit of blood spilled; and let’s not forget about the crowd who was yelling and urging the participants on.  In the end, there was a winner, and damn was it a close call, but I was glad when it was over. That was enough intensity for one night.

For the rest of the evening, the whole group sat around the fire, laughing, drinking beer, and playing games. I also learned of a new tradition, which was reading a raunchy romance novel around the campfire. The book was called Lobster and it was about a human woman who falls in love/lusts for a Lobster. Yeah, it was weird, but I believe that’s the point for that tradition. To find the weirdest book possible, read it aloud, and see how uncomfortable people can get. Man, what an unforgettable night. 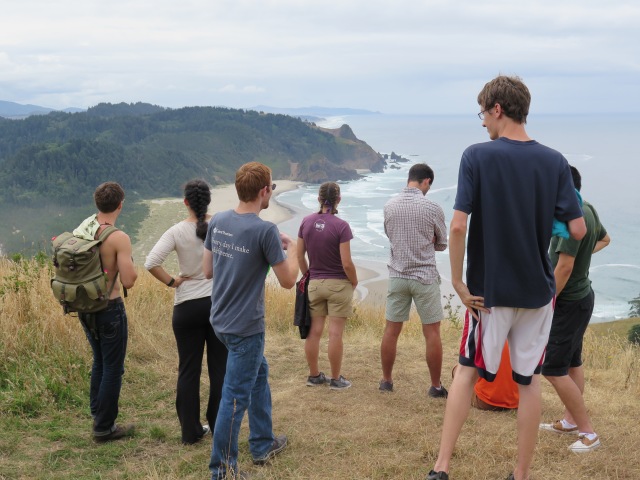 The next morning was clean up time. We packed up our stuff, swept the floors, and got ourselves outta the house. As a group, we decided to do one more fun thing before the weekend was done and that was to go hiking at Cascade Head. I was super excited to hike in coastal old growth forest again!

It was a short hike, but it was jam packed with stunning views of the Oregon Coast and humbling moments among the Sitka Spruce-Western Hemlock coastal rainforest. When we reached the top, I sat among friends looking out to the ocean and I felt very happy.

A smooch for one of my favorite people 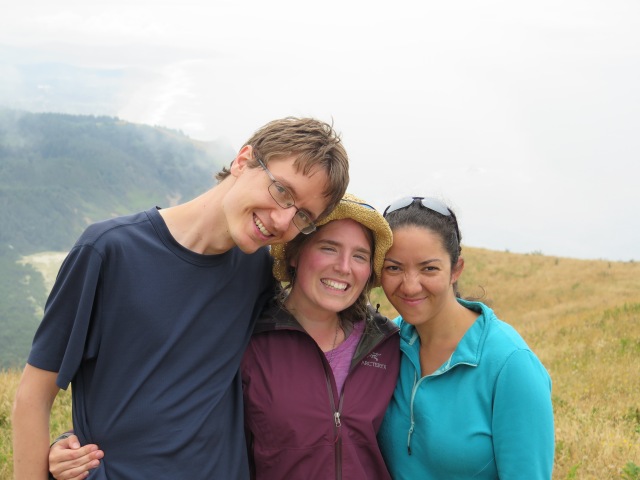 Two of my favorite people. I was in their wedding 4 years ago.

Thanks for reading. My next stop is San Francisco to visit my sister and brother-in-law. <3

Such an amazing trail!

2 Comments on “Portland: Coffee, Beaches, and a Death Pit”

Join 122 other subscribers
Follow Molly's Journey to the West on WordPress.com