Spring is here and Summer is only around the corner in St. Paul, MN. The May Day Festival has come and gone; my pea, kale, and lettuce plants that I planted from seed have sprouted and are growing bigger and bigger each day; and my friend Jim and I have gone morel mushroom hunting—and have had success! Also, my front and back porches have finally been utilized for their purpose: to host friends during those alluringly warm summer evenings. One evening, four of us sat on the step of the back porch, looking up into the night sky. It was fortuitous because lo-and-behold, Jupiter and the moon were in alignment. Another evening, a few friends and I sat on the front porch eating pizza, chatting about a recent friend’s trip to Ghana, and laughing loud until we realized it was well past bedtime for my next-door neighbors’ children.

The morels. Some are more gray, while others are more brown. Jim and I fried them up with butter and salt; yum!

Well, enough about that, let me tell you about my short trip up to the North Shore.

A few weekends ago, I decided to go up north for a couple nights. I had planned to mimic what I did the previous year (Hammock Camping on Minnesota’s Superior Hiking Trail), but on a different portion of the SHT. Similar to what I said in last years post, the best part about the SHT is that you don’t need to plan too far ahead. No permits are required and there are several entry points; most of which are easily accessible. All the information you may need can be found on the SHT Association’s website. Maps, trail conditions, and transportation services are just a few of the resources that the SHTA provides.

I’m glad I stopped by because the staff told me that the trails up on the ridge line north and south of Gooseberry Falls SP still had ice and snow. They encouraged me to use crampons if I was planning on climbing up those steep, rocky cliffs. I hadn’t packed crampons and hadn’t prepped for icy/snowy conditions, so I decided to implement my plan B: camp overnight in Gooseberry Falls SP! 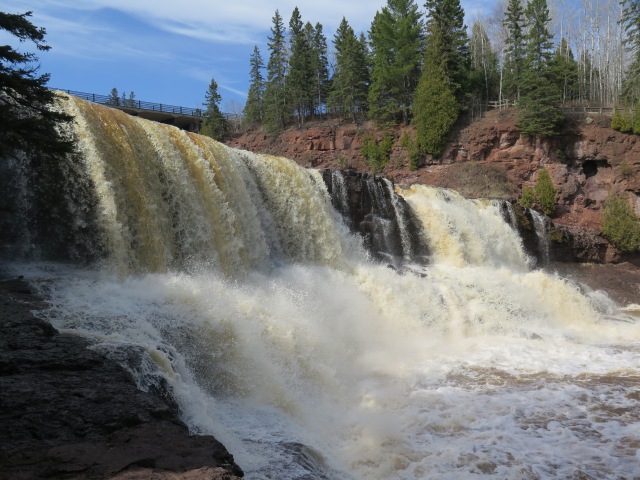 The Middle and Lower Falls in Gooseberry Falls State Park. Adjacent to the Visitor Center.

Above the Upper Falls, looking East to Lake Superior. That bridge is the highway and also has the Gitchi-Gami Bike Trail on the lower part.

I arrived at Gooseberry Falls in the late afternoon—after a 3.5-hour car ride listening to the 4th installment of The Girl With the Dragon Tattoo series: The Girl in the Spider’s Web. It’s a thriller! Before prepping my campsite, I decided to swing by the visitor center to pick up a map and to go hiking. I wanted to hike the state park trails, as well as on some of the SHT portions that bisect the state park. I first visited the famous falls that are only a quarter-mile from the visitor center (as seen in the photos above) and then I wove my way northwest following the Gooseberry River until I reached a bridge with signs pointing me toward the SHT. I crossed the bridge and found my first SHT signpost (the photo above) and followed the trail northwest toward Fifth Falls.

The SHT in Gooseberry Falls SP.

The hike wasn’t long, but it sure was scenic. The farther you walked away from Lake Superior, the deeper the river gorge became. I hiked off-trail for a short time to sit within the Gooseberry Gorge. I listened to the water and to the distant fisherman casting out their lines to snag a trout. I climbed back out and soon enough arrived at the bridge which crosses over Fifth Falls. I had a fantastic view of the gorge and ate a small snack while listening to the roaring falls below.

While at the bridge, I had to make a decision. Either, I could continue West up the ridge or I could loop back toward the visitor center. I had about 3 hours of sunlight and had to consider how much time it would take to set up camp, make a fire, and cook dinner. I decided to return to the visitor center, but I wanted to see a different part of the park, so I took the long way back. I also noticed that I could hike a different portion of the SHT if I hiked an extra 2.5 miles, which is exactly what I did.

Most Minnesota SP’s offer ski trails during the winter months. This is one of them in Gooseberry Falls SP. 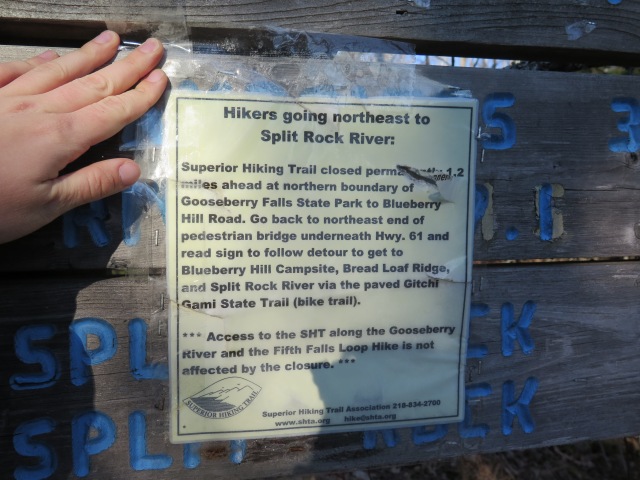 Sadly, the portion of the SHT between Gooseberry Falls SP and Split Rock Lighthouse SP is closed (due to a private landowner closing off his land from hikers). There is a detour set in place on the Gitchi-Gami Bike Trail.

I could see Lake Superior at the highest elevation I reached while on my hike.

Once I reached the highest point, which was also pretty close to the SHT trail entrance, I descended back down into the Gooseberry River valley. I made sure to hike a bit slower, so to fully appreciate the evening sunlight’s long shadows and the quiet surroundings.

Soon enough, I got to my car, registered for my campsite, and prepped for the chilly evening (it was below freezing, can’t remember the specific temp). I first set up my tent, blew up my sleeping pad, set out my sleeping bag, and stuffed a stuff sack with my extra pair of clothes to make a pillow. Once my bed was prepared, I then got to work finding small twigs for my campfire. It had rained the previous couple days, so many of the twigs were wet, but I lucked out and found a handful that were pretty dry. I also walked to Lake Superior’s rocky shore—I forgot to mention I was camping just beside it—and found remarkably dry driftwood! (As a heads up, driftwood makes exceptional firewood. It’s so lightweight and dry that it’ll catch fire easy. It makes making a fire so much easier.) While I was searching for driftwood, the sun had set giving the rocky shore and Lake Superior a purple hue (as seen in the featured image). 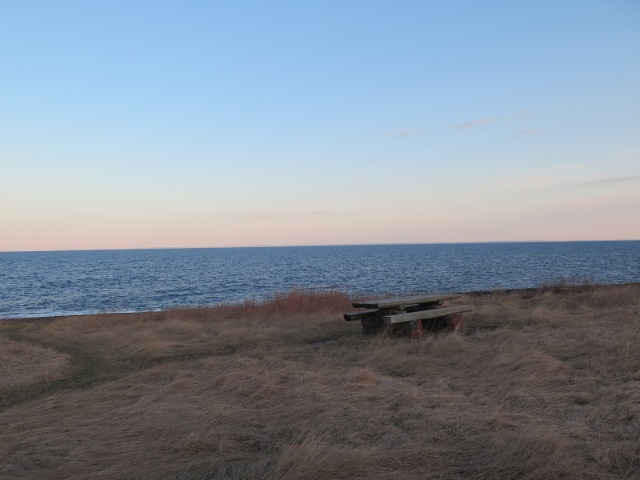 I returned to my campsite with everything I needed: kindling (tiny twigs and newspaper), small twigs, driftwood, and firewood bought from the visitor center. I carefully stacked my twigs in a teepee shape. Smaller twigs were on the bottom, larger ones on the top, and then I lit the kindling with a match until the fire caught. Once the driftwood caught flame, I knew it would take no time at all for the logs to catch. Soon enough I had a roaring fire to keep me company as the evening quickly became cooler and cooler.

As I prepped my meal (dehydrated red beans and rice), I was surprised by a bright light illuminating the small grove of trees to the east. It almost seemed like a boat light was shining the shoreline. I walked over to see where the light source was coming from and was in awe when I saw that is was the full moon rising over the horizon. The moon was remarkably bright, the brightest I had ever seen. I sat down for a while—keeping an eye on my fire—and watched the moon rise over the horizon.

The following morning, I heard reports that it was going to rain or even snow later in the day. I was planning on camping one more night in Gooseberry Falls SP, but decided not to, since I didn’t want to camp in snowy conditions. I noticed the storm wasn’t going to hit until after 4pm, so I made the decision to visit Split Rock Lighthouse State Park before heading back toward the Twin Cities. With this in mind, I packed up my camping equipment, cleaned my campsite, and said farewell to Gooseberry Falls SP. 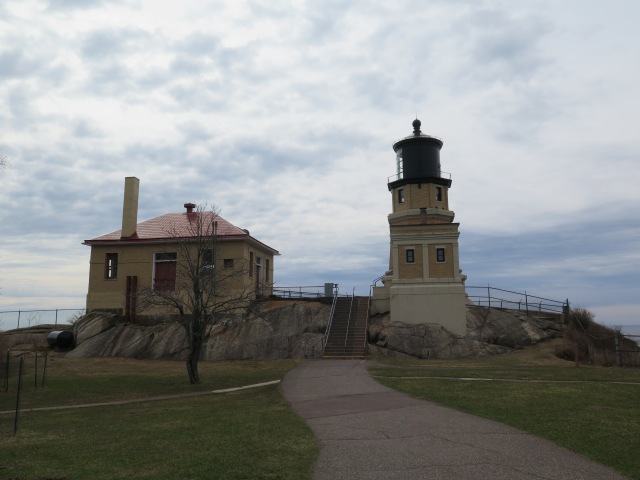 It only took 30 minutes to drive north on Highway 61 to reach Split Rock Lighthouse SP. I parked by the Trail Center and hiked north toward the lighthouse. I walked beside the lakeshore and then was engulfed in an aspen forest. There were young white pine trees scattered in the undergrowth that were either planted by park staff or were in natural succession. As I continued on the trail, I could see the lighthouse getting closer through the trees. There were also informational signs talking about the park’s history, which was very interesting to read. Soon enough, I reached the lighthouse and visitor center. I walked up the steps of the lighthouse and watched as distant barges crossed the horizon heading south toward Duluth. As I watched, I let the cold wind hit my face and listened as Lake Superior buffeted the cliffs below. 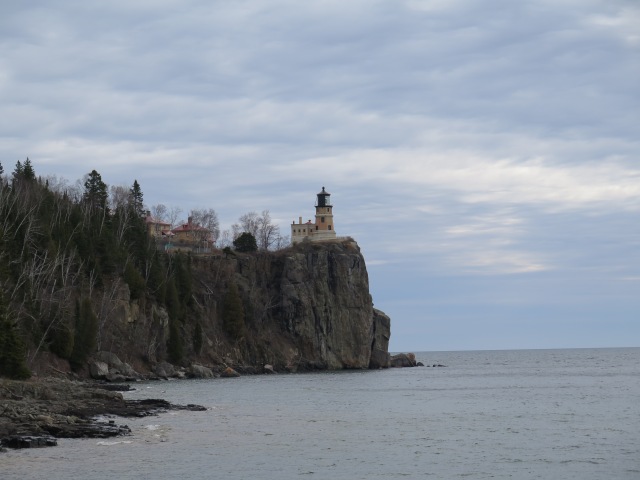 From the south side.

I hiked for most of the morning and had a small lunch on a boulder south of the lighthouse. After, I returned to my car to begin my drive back to the Twin Cities. I decided to take a pit stop in Duluth to explore the town. I won’t go into detail about my time in Duluth, but I believe I walked at least 4 miles around the city, including on the bike trail that borders Lake Superior. I couldn’t of asked for better weather while in Duluth. It surprised me how much warmer and sunnier it was, though I only drove 1.5 hours south!

The rest of my drive went smoothly. I listened to my audiobook and reflected about my trip. Though I only camped one night, hiking on the SHT, sitting beside a campfire, watching the moonrise over Lake Superior, and exploring two new state parks (as well as Duluth) was well worth the drive.

Thanks for reading. In my next post, I may go into more detail about morel mushroom hunting in the Twin Cities! 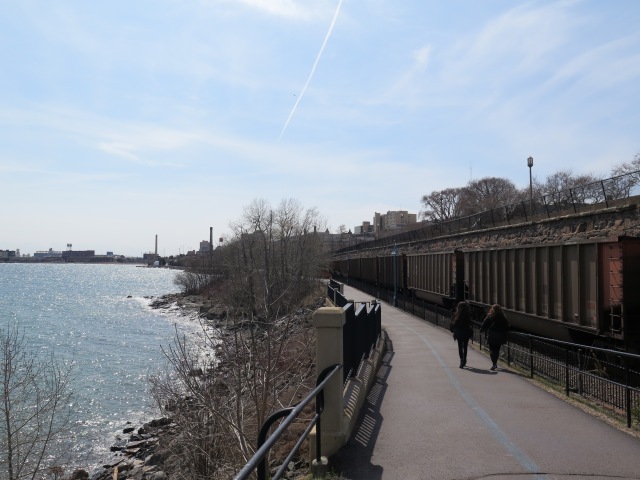 On the bike trail just north of downtown Duluth.